Born in Salisbury, Wiltshire, Michael Crawford began his career as a boy soprano in Benjamin Britten's Let's Make an Opera. Numerous television appearances and over 500 radio broadcasts later found him the popular star of television's Not So Much a Programme, More a Way of Life, which, combined with his screen performance in The Knack, earned him the Variety Club Award for Most Promising Newcomer.

Juggling both film and Stage careers, Crawford went on to star in the films A Funny Thing Happened on the Way to the Forum with Zero Mostel, Buster Keaton and Phil Silvers, The Jokers, How I Won the War with John Lennon, The Games, Hello and Goodbye, Alice's Adventures in Wonderland and Condorman. In 1969, he charmed international filmgoers as the juvenile lead, Cornelius Hackl, in the motion picture version of Hello, Dolly! Starring Barbra Streisand and Walter Matthau and directed by Gene Kelly, who remained a lifelong friend. 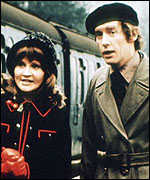 Mr. Crawford became a favorite with international audiences during the long-running comedy, No Sex Please - We're British, which was one of the London Stage's most popular tourist attractions. He later captured the hearts of television audiences as the star of the long-running BBC-TV comedy series, Some Mothers Do 'Ave 'Em, which first aired in the '70's and is still being shown - and receiving top ratings - in countries around the world. For this series, Mr. Crawford was voted the Funniest Man on Television by readers of the TV Times, and Television Actor of the Year by The Sun. 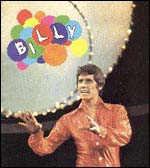 As the star of the John Barry hit musical Billy at the famed Theatre Royal, Drury Lane, Crawford was simultaneously voted Show Business Personality of the Year and presented with the Silver Heart Award by the Variety Club of Great Britain. Other highly popular performances were Same Time, Next Year, the musical Flowers for Algernon, and the BBC television play, Sorry. Another television series Chalk and Cheese, further increased Crawford's standing as one of Britain's leading stars.

In 1981, Mr. Crawford starred in the London company of the hit Broadway musical, Barnum, at the London Palladium. That performance won him his first Olivier Award, and a video was made for distribution in the United States, and the United Kingdom. In 1986, fate took over and Crawford opened in The Phantom of the Opera, beginning one of the most widely acclaimed and memorable performances in theatre history. 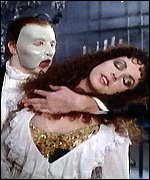 The Phantom of the Opera marked Michael's fourth consecutive starring role in a major West End musical. He set himself apart with his exceptional performance on 1987's international hit album, The Phantom of the Opera (The Complete Original London Cast Recording), whose worldwide sales tally stands at 12 million copies. The album, the first in British musical history to enter the charts at #1, is certified RIAA quadruple platinum in the United Sates. 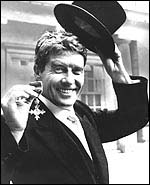 The Phantom of the Opera solidified Mr. Crawford's position in the hierarchy of entertainment stars in the United States, earning him an astonishing catalogue of critical recognition including Broadway's Tony, Drama Desk and Outer Critics Circle Awards, and the Los Angeles Dramalogue Award and Drama Critics Award. After opening in Phantom on October 9, 1986, he was made an Officer of the British Empire (OBE) by the Queen, as well as receiving his second Olivier Award for Best Actor in a Musical.

After three and a half years as the toast of London, New York, and Los Angeles in the title role of The Phantom of the Opera�� Michael Crawford delighted concert-goers in sold-out houses throughout the United States, Australia and Great Britain as the special guest star of The Music of Andrew Lloyd Webber.

Mr. Crawford's solo recording career started soon after the opening of Phantom. Songs from the Stage and Screen�� both released in the United Kingdom on the Telstar label (reissued by Atlantic Records in 1992) moved quickly, but his next recording, Michael Crawford Performs Andrew Lloyd Webber, released by Atlantic Records in November 1992, proved to be even more of a runaway success having sold more than two million albums worldwide to date. Two years later, Crawford recorded another hit album, A Touch of Music in the Night, on which he sang duets with Barbra Streisand and Patti LaBelle.

In 1995, Mr. Crawford created the high-profile starring role in EFX, the $40 million production which officially opened MGM's 1700-seat Grand Theatre in Las Vegas. The Atlantic Theater label released the companion album to EFX, which was hailed as among the most spectacular and ambitious shows ever produced on the American Stage.

In 1998 Crawford filmed his first television special, Michael Crawford in Concert, which premiered nationwide on PBS as part of the March 1998 pledge drive. The TV special was also nominated for 2 Emmy Awards later that year. Also that year he released his first album of spiritual songs On Eagle's Wings, and Michael Crawford in Concert, a recording of his worldwide concert tour.

In 1999 Mr. Crawford published his autobiography Parcel Arrived Safely: Tied with String in the UK, Australia, and New Zealand. The book became an immediate best seller. As a companion to the book, Mr. Crawford also released an audiotape on which he read a shortened version of the book. Later in the year, he released Michael Crawford: A Christmas Album in the U.S. It was later retitled and released in the UK as The Most Wonderful Time of the Year.

In January 2001, the PBS special An Evening with Michael Crawford in Concert aired in the UK. In mid-April, he released an album of Disney songs aptly titled Michael Crawford: The Disney Album in Australia and New Zealand. The album quickly climbed the charts and was certified Platinum by the Australia Record Industry Association marking the first time in 30 years that a Walt Disney recording had achieved this position on the charts. The album was also certified Gold in New Zealand ranking No. 2 in sales. Later that year, a compilation album The Best of Michael Crawford was released in Australia and later reached the Top 10 in sales.

In 2002, Mr. Crawford returned to the Broadway Stage in the musical comedy "Dance of the Vampires". In the musical based on the 1967 Roman Polanski film horror spoof "The Fearless Vampire Killers", Michael played Count von Krolock. 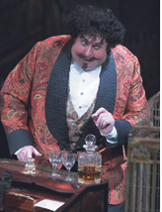 In 2004, after an 18-year absence from the London Stage, Michael returned to portray the diabolical yet charming Count Fosco in the Andrew Lloyd Webber musical The Woman in White. Based on the 1860 Victorian novel by Wilkie Collins, the musical opened on September 15, 2004 at The Palace Theatre.

As the grossly overweight Count, Michael nearly stole the show in the hit musical and received much critical acclaim receiving a number of honors including the British Variety Club Award for "2004 Outstanding Stage Performance," an Olivier Award Nomination for "Best Supporting Actor in a Musical," and a Whatsonstage.com Theatregoers' Choice Award. The Original London Cast Recording was released November 15, 2004.

"The Very Best of Michael Crawford", a compilation album, was released by EMI International in November. The CD includes "You Can Get Away With Anything" from The Woman in White and "Somewhere in Time" from EFX! written by Michael's old friend John Barry.

In 2005 Michael performed several concert bookings in Newport News, Virginia, Mesa, Arizona, and Dallas. In 2006 Michael conducted a sold out concert tour of Australia and New Zealand, followed by more concerts in the United States including Atlantic City and Los Angeles.

Michael made a triumphant return to the West End stage in 2016, starring as Leo Colston in THE GO-BETWEEN, a critically-acclaimed new British musical which played the Apollo Theatre, Shaftesbury Avenue for a successful limited run.
Read More About Michael
in Parcel Arrived Safely, Tied With String
His Best-Selling Autobiography !